New neighbours group in Croydon South off to a flying start! 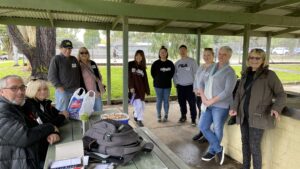 Croydon South resident Richard Hallford joined the Neighbourhood Connect Training and Mentoring Program in the City of Maroondah recently and took just a few weeks to bring local neighbours together, with encouraging results! Here is Richard’s story so far…

“On a pleasantly sunny, but mildly chilly morning, 25 residents of the area met at the Belmont Park BBQ area for the Inaugural Croydon South Neighbourhood Connect meeting.

And what a lovely gathering it was. The atmosphere was collegial and people were repeatedly grateful that an attempt to connect had been made.

Amongst the residents was someone who had lived in the area since 1978, three young families with children, living closer than the first thought in the area, an 8 month old baby boy, a very pregnant lady, new arrivals to Australia, a medical student, retirees, IT professionals, and an Accountant.

In less than two hours, Richard and his neighbours not only met each other for the first time but came up with some wonderful ideas for neighbourhood action.

Thanks Richard, what a fabulous start! 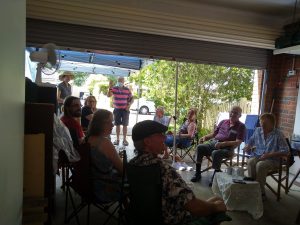 It was a great Street Gathering on 24th January 2021. About 20 people rocked up on a hot summer afternoon. Five new neighbours joined the gathering, including a lovely young French couple who just moved in next door a month ago. When they found the invite in their letterbox they expressed how delighted they were, as they had wanted to get to know neighbours but didn’t know how – not wanting to impose.

The three other ‘new’ neighbours all knew each other – and the one that had received my email invite invited the other two. They also expressed their delight in receiving the invitation and having an opportunity to get to know other neighbours in the neighbourhood who were interested in meeting. I described how easy it was to create the street gathering (just put invites in letterboxes) – as people then self – select to come – which means you will only get people who genuinely want to meet other neighbours.

We shared stories about the pandemic – and all expressed how much they valued living in this neighbourhood with so many friendly people that were willing to wave and smile during the daily neighbourhood walks. One of the ‘newcomers’ (Diane) was delighted to meet Wendy who had provided the free pots of raspberry plants that she had grown in her garden.  A number commented on the inspiring quotes that appeared regularly on a blackboard in the neighbourhood – providing a source of hope and inspiration during the challenging lockdown.

All in all it was a wonderful catch up – the first since March last year!

We asked some Neighbourhood Connectors to share some reflections on 2020 in their neighbourhoods. Here’s what they said… 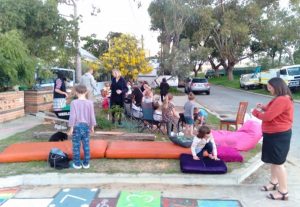 Our small street in Beaconsfield is very diverse with many household types, ethnicity and tenure.

As a resident, I love our street and what we have achieved as a community over the last few years. Knowing my neighbours has built strong connections between us and enhanced the quality of life for residents. There are a number of children in the street and they pop into each other’s houses with ease and safety with impromptu movie nights and sleepovers. We support each other by borrowing tools and pantry goods, babysitting, gardening, alerting neighbours of suspicious behaviour, watching out for our older residents, etc.

Perhaps these activities would have evolved over time, but I think that purposely working together as a community has been the catalyst. We have a Facebook page and a WhatsApp group; we hold regular potluck long tables and have special events for street projects. We decided on activities to enhance our street, including planting street fruit trees, petitioning the local council to upgrade our sump into a pocket park and holding a workshop to build bird boxes. Our little parklet gives our street a focal point to gather and a sense of belonging. 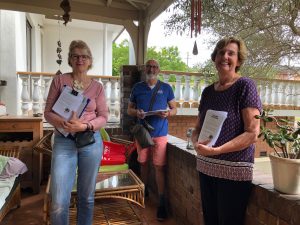 “After door knocking over 300 homes in our neighborhood, Bev, Olive and I learned that there are already so many well connected neighbours. A nice cul-de-sac is a village and , in quiet, leafy streets, neighbours already chat and connect more than in the speed zones. I also learned there is a deep yearning in many people – some already active – to be ‘local’ and just help out. We have had offers of ‘let me cook some meals to deliver to isolated neighborhoods’ to ‘Us old ducks want a dinner club to get together and just cook for each other’. When we had a few meetings in the park for people to drop in and share their ideas, so many also offered how they could help and already started making connections (“So you are the nice lady that lives in the house backing onto my place!”). Things have already changed just by knocking and chatting. And we have not really started yet.” 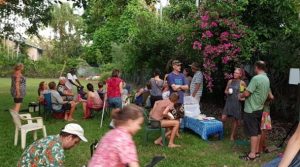 “This year we were able to hold two in person events – a morning tea to celebrate neighbour day & a street party /’build-up/ hot season’ gathering in recent weeks.  We also joined forces to mulch some of our street trees.”  Louise

“I have lived in the same house in Rapid Creek for 22 years and whilst a had a good work network, I knew little of the people who lived around me. All that has changed positivley and I have found a huge group of like-minded people that not only are they great people but also very community minded. So lucky to live here.”  Eve.

“I am finding a definite change in our small community, of friendship and awareness of who our neighbours are. It is a great feeling!” Helen

Our Neighbourhood Groups have some amazing stories to tell – stories of connecting, of sense-of-purpose, of fun, of belonging!

The joy of bringing people together

Bullcreek, WA local Monika, says she was keen to build community unity and her neighbourhood connections when she came across Neighbourhood Connect as a tool to support her ideas. With invitations in hand Monika doorknocked the neigbourhood, inviting people to her open house and was delighted with the response. A total of 39 attended the event including her family, 24 neighbours as well as friends and colleagues

Monika says the highlights were: the number of neighbours attending, the joyful atmosphere that was felt by all attending, the expressions of gratitude from the neighbours and their enthusiasm to further develop community on the street. The friendly interaction of neighbours with each other and even the disappointment of those unable to attend this time but wanting to attend an event in the future, gives optimism for lots of future positive neighbourly connections in Bullcreek!

The snowball effect of connection

Scott from Nedlands WA, has been bringing people together since 2017 and connections are organically building as a result. Scott says of his motivation “In a time when people are more connected (online) than ever before more and more people are suffering from loneliness and isolation, getting neighbours together is a way of forming bonds and breaking the isolation.”

Since the first Christmas party in 2017 the group has had plenty of follow up parties and events. A number of connections have been made and now thanks to the parties many families in the area have started a kids play-group. There have been many friendships formed from the parties and this will only improve over time. For each party Scott letterbox drops the six streets in the area (around 550 houses) and puts up signs at the main entrances to encourage new people to come. On the flyers he always asks people to invite their friends/family and neighbours. On the night he puts out a table, chairs, esky, lights, music, sign in sheet, name-tags and brings along some chalk and games for the kids. For the Christmas party this year, he is considering a treasure hunt.

Scott’s experience shows that once you take the first step, wonderful new connections can unfold!

Your community may be your best ally against loneliness

You would be forgiven for thinking the Vintage Car Club was all about shiny old vehicles and passionate tinkerers… but this club is not what you think.

The Vintage Car Club is a neighbour group in McCrae, on the Mornington Peninsula in Victoria, named after their local streets, all sharing vintage car names. You’re more likely to see these group members chatting over the fence or sharing a glass of wine than polishing their hubcaps, and that’s just the way they like it.

What turned this area into a blossoming community was 60 initial letterbox invites, leading to 20 attendees at that first meeting. In just over two years, these former strangers, along with new additions, have built ties that enrich their lives on a daily basis.

People who live alone have found a strong system of support against their loneliness and more often than not, there is someone to join you on a walk, go to water aerobics with or have a laugh with on the other side of your fence.  Jenny McCarthy, the local Connector who got the group started and now gathers people monthly for social occasions, shared some of the positive outcomes from her group.

“We have been going for just on two years now and are still attracting over 20 people to each event. As we are all retired people, we don’t get involved in neighbourhood clean-ups or community projects, however we are very active as a group on a social level.  We keep it simple by going out to cafes or restaurants or having bbq’s at each other’s homes.  As we age it is very important to maintain social interaction with our neighbours.  We all feel confident in calling on each other for help with things like house-minding, collecting mail or mowing front lawns if we go away. We also help with getting to medical appointments, preparing meals or shopping if incapacitated.

The formation of our neighbourhood group has created a wonderful sense of community and friendship amongst us all.  We all feel safer in our locality and confident that our neighbours would come to our aid in an emergency situation.”

Bumping into people, and liking it…

Going on three years now, the St Kilda West Neighbourhood Connect Group has cultivated a community that gives its members a sense of home and belonging, not just a coincidental similarity of addresses. Catch-ups, walks, movies, and just “giving each other a hand” are all part of it, says Clare, who is grateful for the lovely people and new friends she has met as a result of this neighbour group.

Indeed, this Melbourne-based suburban community has been a boon for people in different situations. Sara recalls, “When we were younger, there were easy ways to meet people. Now it’s harder. We’re new here and were so happy to get the invitation to meet our neighbours. It’s great for us.”

There are also those anticipating big milestones. According to Barb, one of the earliest members and a connector in the group, living in a closely-knit neighbourhood has given her a system of support outside work and family. The relationships she has built with her neighbours are of added value to her life, as she prepares for her retirement in a few years. Barb also dispels the notion that neighbourly connections need remain superficial, restricted to how-do-you-dos and asking for favours. She insists that her group brought about a new “depth of knowing people, having more personal conversations.”

While the eye-averting majority that live among strangers might find it puzzling, for the lucky few in connected communities like Barb, knowing more neighbours is a win-win “It’s great bumping into people I know and having a chat.”